The DOHC, 4.6 is a very wide engine. In fact, it’s as wide as the old 385 series big block engines [429, 460, etc] and as a result, Ford switch to a hydroboost brake system instead of the traditional vacuum assisted setup. This meant that I had to update my ’95 GT to ’96-04 specifications to accommodate the added girth.

Upon closer inspection, I discovered some surface rust that had accumulated below the brake booster and needed to be dealt with. It appeared that there had been an undiscovered brake fluid leak and it really did a number on the paint. The easiest way, which wasn’t really that easy at all, to reach the nuts securing the booster/master cylinder to the firewall was to remove the dash board assembly. This also paved the way for the upcoming dashboard and wiring harness swap from the donor car. After removing the old parts, I was able to fully survey the rust damage. Luckily, it was very superficial and I was able to clean it up nicely using a wire brush, some “Scotch Brite” pads and “elbow grease”. A quick coat of self etching primer and gloss white paint finished the job. There is SO much work left to do!! Stay tuned for pictures of the upcoming engine, transmission installation!! We have also acquired a cowl hood to replace the current, well worn Cobra R hood. Next, we will be ditching the abused Cobra bumper and upgrading to something a little more aerodynamically suited for autocross. 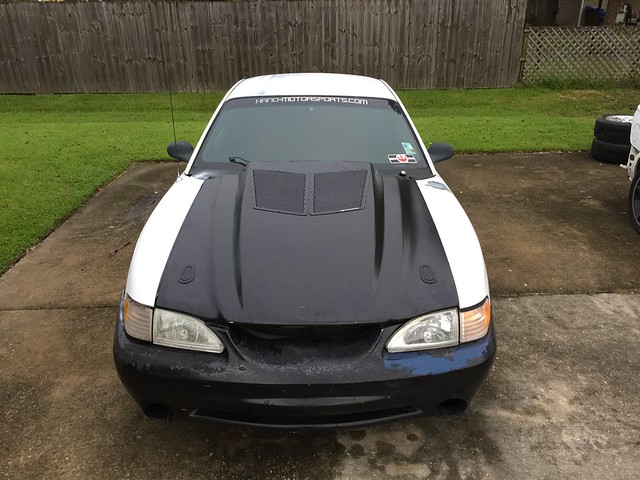